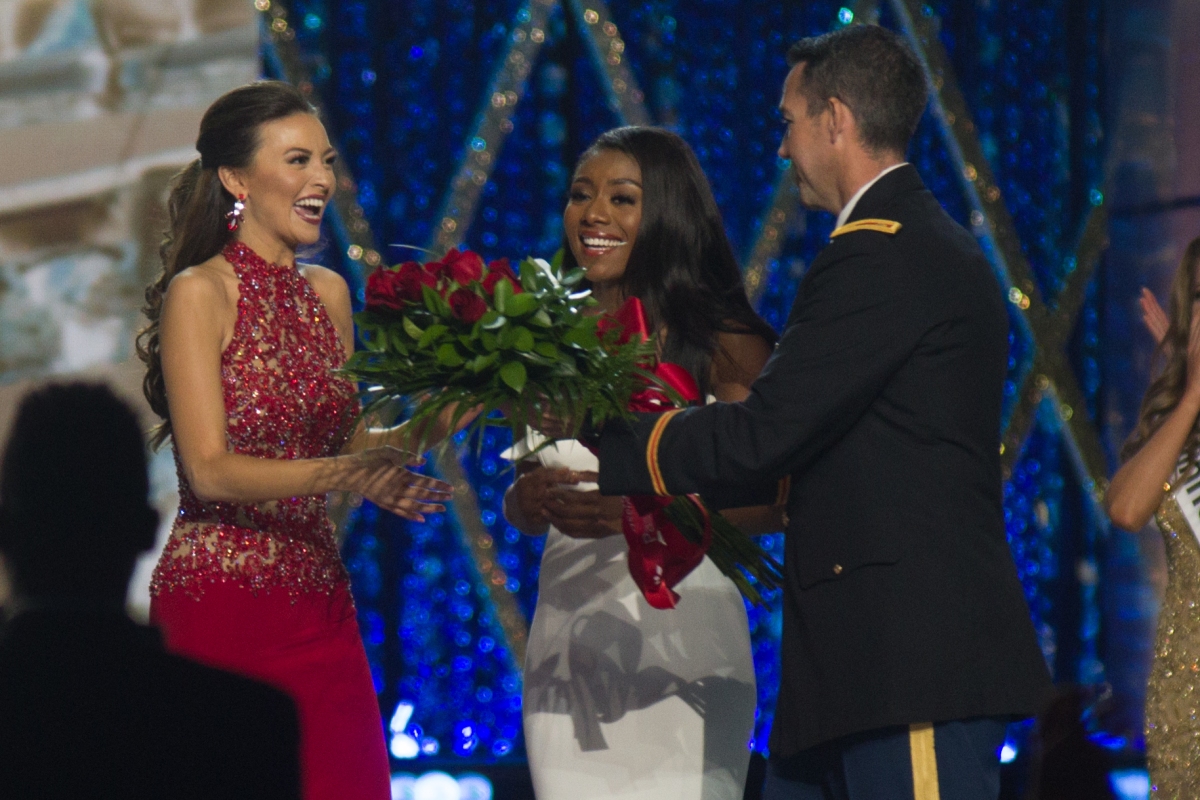 Oei impressed the national television audience with her high-energy Irish Step Dance that included a moonwalk tribute to the King of Pop, among many impressive movements. Taveras shined while singing a soulful rendition of “Rise Up,” a song that expresses much of the obstacles overcome by the Lawrence, Mass. native.

Both women impressed judges with their stage presence, as well as how they spoke in the competition’s red carpet phase, on-stage question contest, and a new phase, that included questions from the other contestants.

Taveras was asked, by Miss Wisconsin Tianna Vanderhei, about how people can improve face-to-face interactions in a world obsessed with social media.

“Simple put, it’s time to just put them down. Unfortunately, technology has made us dehumanize one another,” Taveras replied. “We start to look at people as Democrats or Republicans, black or white — there’s no grey area anymore and that’s really important in 2018. We’re not just one kind of person. We’re a multi-faceted, complex people, and the women on this stage — we represent that.”

Oei, who had developed a tracheal implant that powers pacemakers using a patient’s own breath, was asked by pageant judge Carnie Wilson what she wishes she had invented.

Oei replied by saying that a friend of hers had a stroke years ago, and she did not recognize the symptoms.

“I would like to invent an app that allows a person, when they see red flags, to go through the symptoms, [so] they know whether they need to get that patient some medical care,” Oei said.

On Friday, Sept. 7, New England Pageant News was able to sit with both Oei and Taveras for a second time during pageant week, and asked both how they were getting ready for the finals, and how it was to perform their talents on the Miss America stage during prelims.

“It was so exciting. So invigorating,” Oei said. “It was very honoring to perform on that Miss America stage and show America what Irish dancing is all about. I’ve had the time of my life since I began and I am just enjoying that stage.”

“Honestly, I don’t know what happened on that stage last night,” Taveras said. “In every phase of competition…I’ve kind of not been really there, which is interesting. I know I’m present, I know I’m there, but afterwards, I just kind of blacked out the entire thing. It’s like an out-of-body experience. When I went back and listened to my song on video, I was like ‘Oh, I really did do a good job.'”

“Who knows,” she said. “I think that I’m giving it everything I’ve got, ad that’s all I can do. There are some things that you can control, and some things you can’t. I can only worry about Bridget. I’m feeling excited, feeling ready. Can’t wait to get out there and speak my truth.”

Taveras had a similar thought.

“I genuinely have no idea, because everyone had a great interview, and everyone is so accomplished. It’s really going to come down to what the judges are looking for. If you want someone who has a PhD, I’m not your person, because I don’t have a PhD. All I can do is hope that the judges saw something in me – that they saw how genuine and authentic I am, and just listening to my story and where I come from, and the impact that it can have on people.”

Oei’s first runner-up finish means that she did the best she could do, and still gets to go back home, which she was looking forward to.

“There’s so much more to do when I get home,” she said. “I have appearances set up. Schools are in session, so I get to talk to them about my STEM initiative. I really get to make an impact in Connecticut, and that’s what my year is all about, so I’m so excited to do that.” 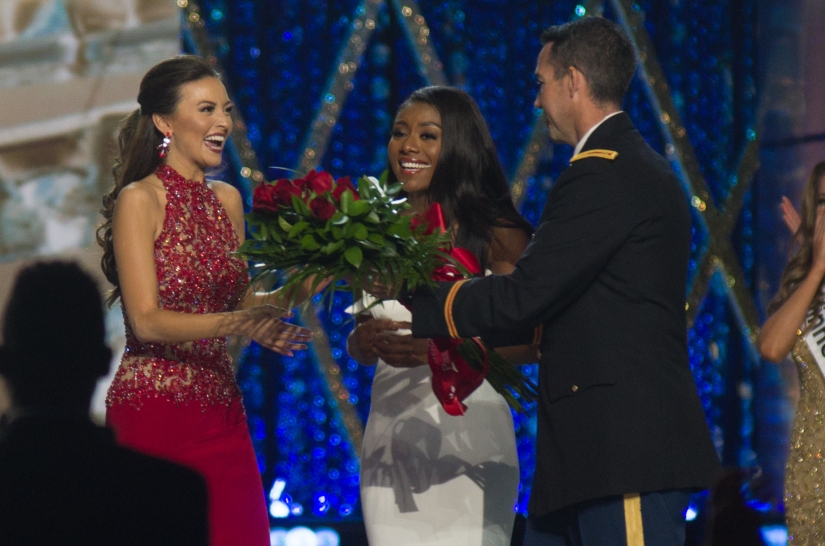 Miss Connecticut Bridget Oei (from this reporter’s home state) sat with New England Pageant News and spoke about the experience of being on the Miss America stage, as well as what she sees as her role as part of Miss America 2.0.

Are you excited for tonight’s talent prelim?
I can’t wait to do my talent on stage. A) It’s on the Miss America Stage, and B) It’s my talent, but also half of my culture, so I can’t wait to show America what Irish Dancing is all about. I re-edited the music to be a little more full and powerful for Boardwalk Hall. I had my competitive Irish Dance teacher, Dr. Colleen Griffith, choreograph it, so it is new, improved and very exciting.

What’s been the best part of being in Atlantic City?
Definitely meeting the other contestants. Never again will I meet so many girls from across the country…with the same goal, the same dream and the same motivation. It’s really a surreal moment.

How did your interview with the judges go?
Wonderful. The judges really wanted to know who I was, where I came from. I got to talk about my talent and my plan as Miss America. I really got to communicate my goals, and just who I am, which is a very excellent feeling when you don’t know these judges, but they are deciding your future.

What’s it like being on that famous stage?
There’s something so natural about it. You get very giddy. You’re either dancing or bopping to the music. It’s very exciting. That stage has a powerful magic to it. Whether it’s the old stage with the runway, or the new one, it’s just magical. I had the time of my life [last night in prelims] and if I was over-exuberant, I did not care. I just enjoyed it.

What is Miss America 2.0 all about and is that you?
They want someone who is charismatic, energetic and exciting, and can inspire and move the nation to get excited about the new, female future that we’re heading toward. How you translate that on stage is just being as bright and as completely yourself as possible. That’s what I really felt I got the chance to do when I walked on stage in evening gown last night, and that’s what I’m here to do.

Whether you become Miss America or not, how will this experience affect you?
There truly is no way to be disappointed with this experience. Meeting 50 other contestants, working with a world-renowned production crew, and the Miss America program in general, you gain pain perspective. You grow your understanding of the world around you. It’s very exciting to be a part of that. I’ll come home with a better understanding and appreciation of how the world works.

Are the changes in the Miss America program affecting you?
It can be stressful, sure. We all love the program so much, so we’re concerned for its future, but you just have to step back and say, “I am part of its future, so what can I do?”
Sometimes you have to forget about everything else that’s going on, and remind yourself that you have a job to do, and there’s no one else who is going to dictate how I do it.

What do you want to say to Connecticut?
Thank you for believing in me, and for giving me the opportunity to represent you. I truly believe I am a small part of a huge village. Whether I come back to CT or continue on as Miss America, I want to continue to make my state proud, by sending the message that I came with my goal to transmit, and that I’ll keep that message consistent. I was the same woman who I was before I competed for Miss Connecticut, when I became Miss Connecticut, and if I win Miss America, I will stay so true to myself.