“It’s surreal,” Payne said, describing the camaraderie and closeness with the volunteers and other candidates over the three days of rehearsing and interviews. “It’s amazing to have family and loved ones around. The Miss America Organization is one that supplies mentors and support. It’s a common theme, but it’s true. I’m just incredibly grateful.”

Payne, a student at George Washington University, had competed once before, in the Outstanding Teen competition in 2016, and said this experience brought back memories and good feelings of that one.

“I was surprised at how similar if feels all these years later,” she said. “The board is truly a family, and these girls are very supportive.”

Payne, a Barrington native, said she’s learned to appreciate what her new title means, and hopes she can bring people together.

“My appreciation has grown over the years. People have become more individualized, and the Miss America Organization emphasizes community, as people drift further and further away from that. So, it emphasizes social involvement, and a love for your state and community. I love the Ocean State and it will be an honor to represent it nationally.”

Payne said her social impact – supporting small businesses – is something she hopes to become even more involved in across the state.

“I heard the statistics are very dire for the success of small business, and job growth is on track to do better in Rhode Island, but it could be better [than that],” Payne said. “I would love the opportunity to meet with the governor. I would love to meet as many people as possible who are involved with the economy of Rhode Island. I am an economics major and it would be an honor to meet with them.”

Johnsen, a junior at North Kingstown High School, said it took a moment to sink in that she had won.

“I thought they called the wrong name at first,” she said. “It took a second for me to realize they called my name. I walked forward but it felt like a dream. I couldn’t believe it happened.”

In about six weeks, Johnsen will compete for the title of Miss America’s Outstanding Teen in Orlando, Florida.

“It’s crazy. I started thinking about it when they put the crown on my head, and I said, ‘I have to prepare hard now,'” she said. “When school ends on June 24, hopefully I’ll have more time to prepare.”

Johnsen said maintaining her social media and recruiting other future candidates will be some of the things she’ll be working on soon. She’ll also push her platform of cleaning up the oceans of plastic marine debris – suiting for the Ocean State titleholder.

“I’m going to try to get some legislation passed to reduce the plastic footprint in Rhode Island,” the ambitious teen said.

Johnsen said she plans to take the advice Molly Andrade, Miss Rhode Island 2019 and 2020, gave all the candidates – to relish each second of her year.

“I’m looking forward to the entire experience….because it really will be gone in a flash.”

A competitive Irish Step dancer, Andrade wowed the crowd (which included Miss CT Bridget Oei, also a world-level Irish stepper) and earned the points from the judges to also capture the dance and overall talent awards.

“I’m incredibly grateful and so excited for this opportunity,” Andrade said, adding that if she doesn’t capture the national title, one of her main goals is to increase participation in the Rhode Island program.

“I want to bring as many women as possible to this organization and increase the amount of scholarships we give out,” she said.

She also has plans to help implement a self-defense course at every high school in Rhode Island. She developed her platform after a friend was assaulted.

Andrade said she’s also excited for everything, including appearances and the partnership with Children’s Miracle Network Hospitals.

“I’m just excited to have a great year and a wonderful opportunity,” she said. “It’s incredible. I’m excited to see what the next steps are for Miss America.”

“I just saw how much the program did for her, and how it was an amazing program, basically through social media, and I knew it was something I wanted to be a part of,” she said.

“This is absolutely incredible. I am so humbled. This opportunity means the world to me, and I can’t wait to get started,” she said. “I’m looking forward to working on my platform and working with Molly, because she’s so intelligent.”

Parente’s platform is The Ripple Effect: Rising To Initiate Prevention and Positive Lifestyles Through Education.

“Basically, I want to educate all youth on how to educate their peers about substance abuse, because youth really do make the difference in this,” she said, adding that she is an intern for a national government coalition for the program.

Caroline Parente performed a theatrical number as her talent.

Molly Andrade has a point to make during her on-stage interview. 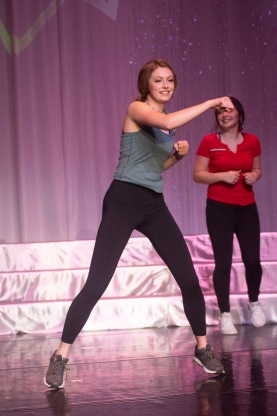 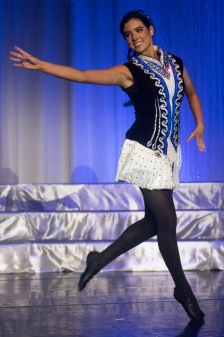 Molly Andrade performed a high-energy Irish step routine on her way to the crown. 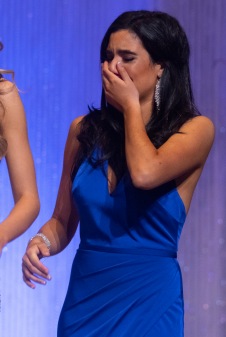 Molly Andrade learns that she will be competing for the Miss America crown. 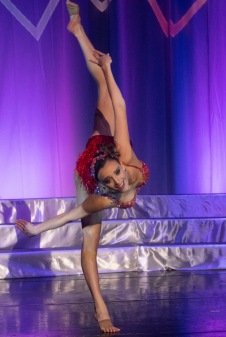